A Conservatory With a Panoramic Aspect

4 years ago
Mark Wheelwright
Before & After, Projects By Mark
No Comments

When Chris was looking to completely renovate his property, he contacted Gardinia to look at replacing his windows, doors and fascia’s throughout his home in Golcar. The original idea was to also build a lean too conservatory over the existing French doors that would sit beneath his proposed balcony.

Below is a photo of the back of Chris’s home before any work was undertaken by Gardinia: 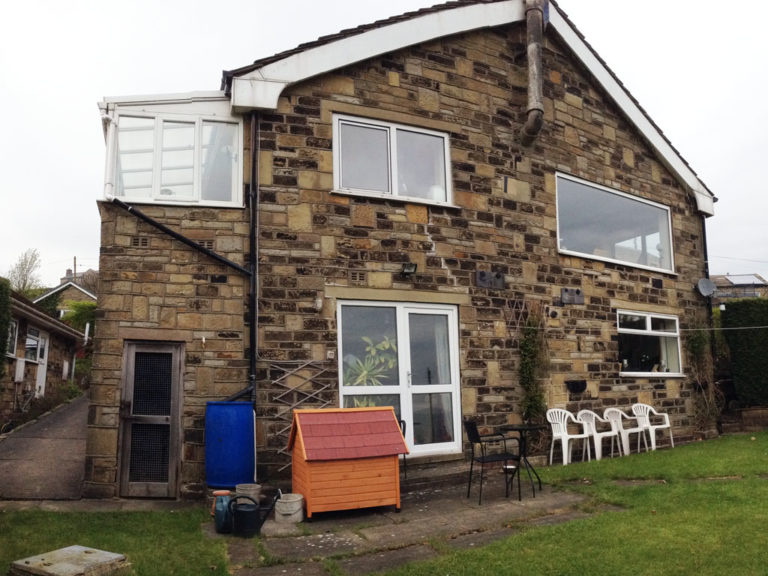 The bedroom window within the conservatory was removed and the wall beneath it was cut down to create an open plan area with a guest bed to the other side of the room. The conservatory was constructed in Anthracite Grey Outside / White inside, creating an effective contrast to the new cream windows, fascias and soffits. The new position of the conservatory leaves the remainder of the garden bathed in sunlight whilst taking full advantage of the fantastic views. 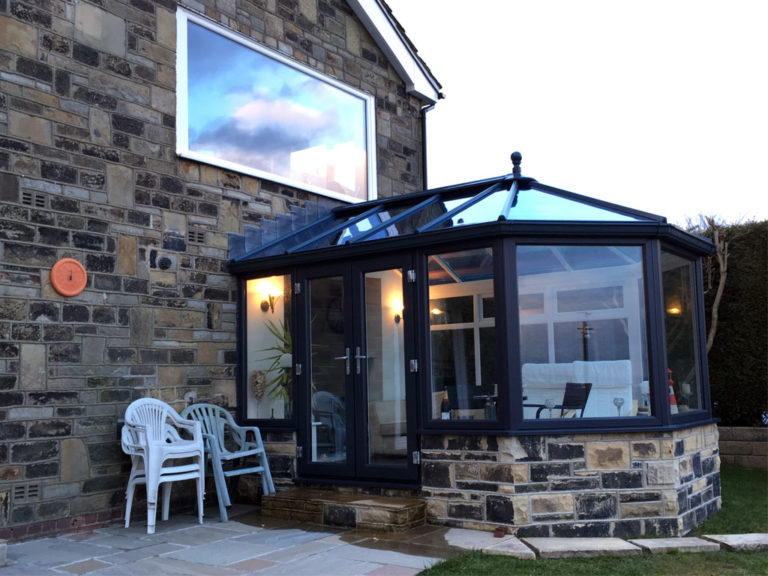 Dark coloured external cappings on most conservatories suffer from ‘fatigue’ as they age due to excessive expansion and contraction. This can lead to the glazing material slipping resulting in conservatory roof leaks. All the exterior cappings on this roof are manufactured using unique powder coated Aluminium which doesn’t suffer this problem, so Chris will enjoy his conservatory long into the future.

Below is a 360 photo from the inside of Chris’s conservatory:

Inside view of a Conservatory with a panoramic aspect.360 Photo

The back of Chris’s home with the new cream windows, fascias / soffits and conservatory: 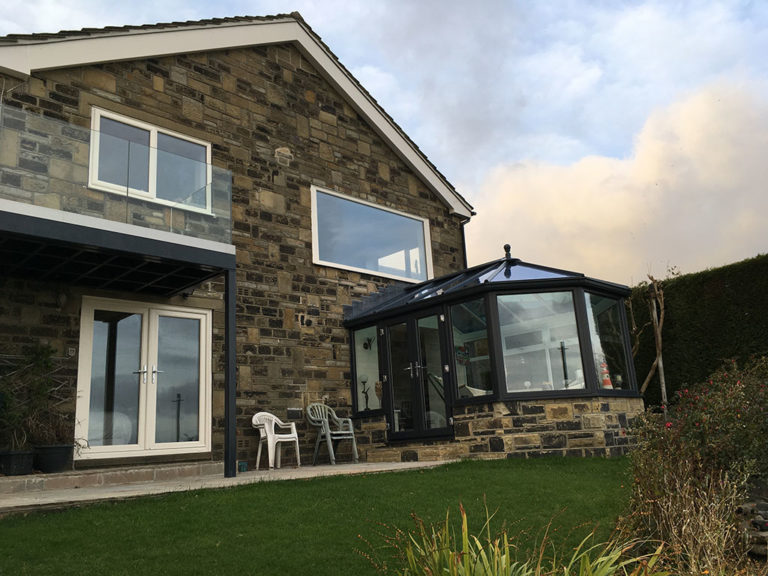 Below is another 360 photo looking at Chris’s conservatory from the garden, showing the fantastic views as the photo is rotated:

Outside view of a Conservatory with a panoramic aspect.Spherical Image – RICOH THETA

Photos of the far reaching views which can be seen from the conservatory: 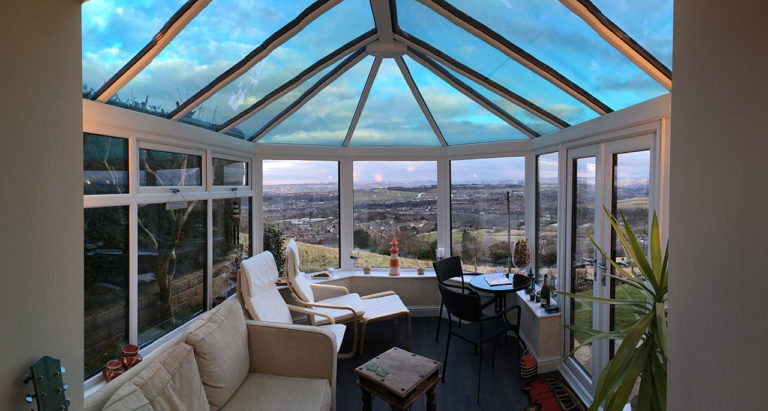 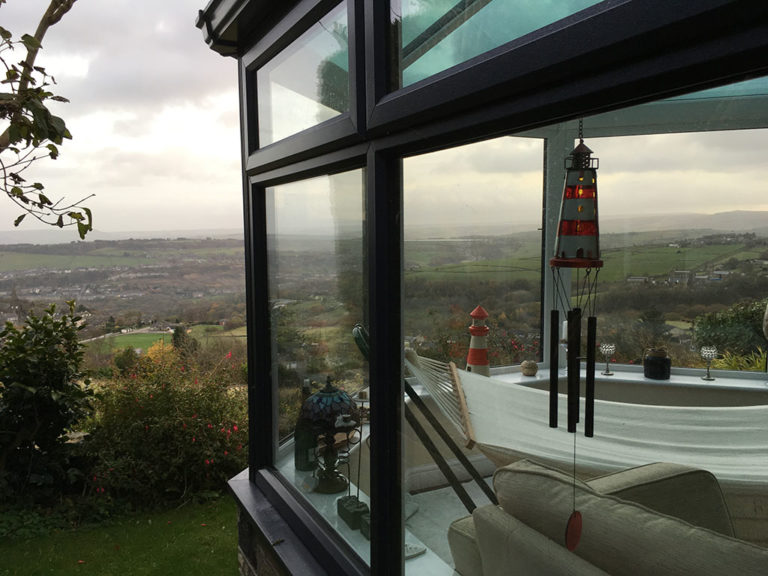 As part of the project Gardinia also modified the existing lean too conservatory on the side of the property by installing a new door and window. This now gives Chris access to his new balcony: 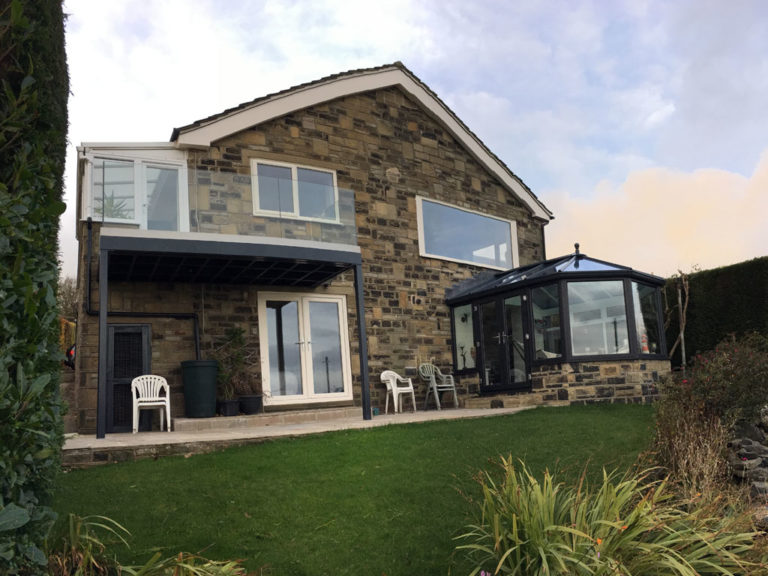 Looking at the conservatory from below the new balcony: 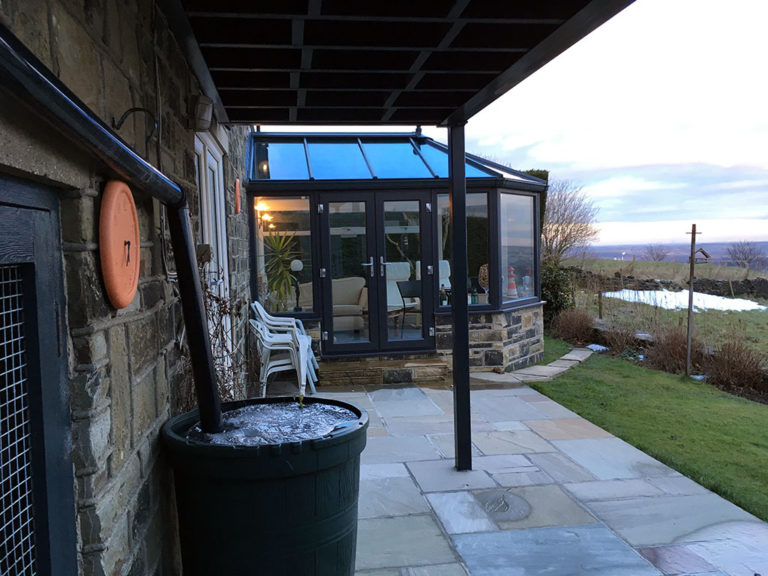 The front of the house:

Moving on to the front of the house, below is a before photo taken before any work was undertaken by Gardinia. 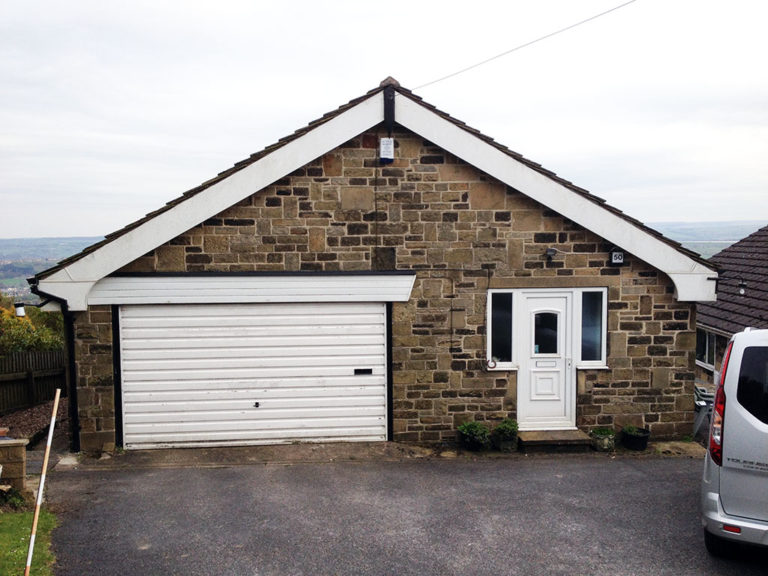 After new fascia’s, windows and doors were installed: 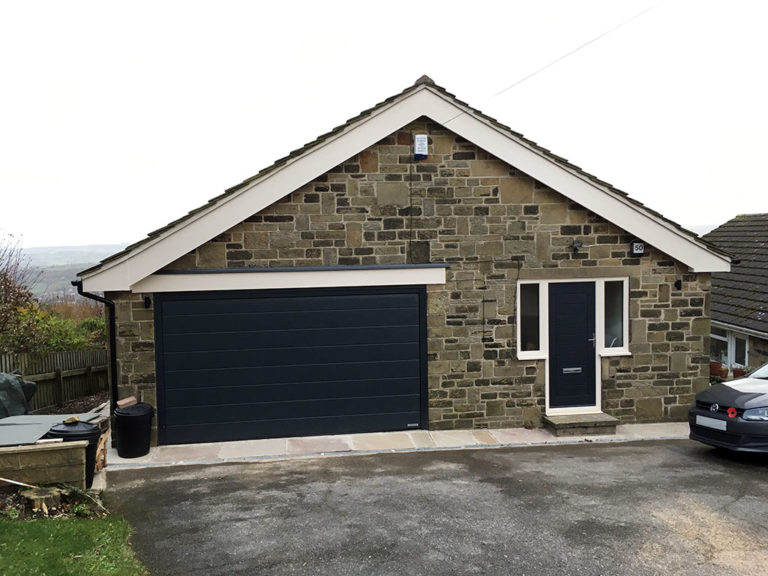 The front door is a Windsor style in anthracite grey, with a cream frame to match the windows, chosen from our Solidor Composite Door range.

Chris is that pleased with new conservatory, windows, doors and fascia’s he gave us an open invitation to show any potential customers the fantastic end result.

Mark Wheelwright
Mark has been with Gardinia since 1992, initially specialising in Conservatories which have won multiple industry awards over the years. Mark has had a pilot’s licence for over 25 years and also enjoys sailing the canals with his boat club.
Previous Post
Home Security Enhancing Products For Upvc Windows & Doors
Next Post
A Room With a View

We use cookies on our website to give you the most relevant experience by remembering your preferences, repeat visits for the personalisation of ads. By clicking “Accept All”, you consent to the use of ALL the cookies. However, you may visit "Cookie Settings" to provide a controlled consent.


Please read more to better understand how cookies and any data gathered when browsing our website is used.

This website uses cookies to improve your experience while you navigate through the website. Out of these, the cookies that are categorized as necessary are stored on your browser as they are essential for the working of basic functionalities of the website. We also use third-party cookies that help us analyze and understand how you use this website. These cookies will be stored in your browser only with your consent. You also have the option to opt-out of these cookies. But opting out of some of these cookies may affect your browsing experience.
Necessary Always Enabled
Necessary cookies are absolutely essential for the website to function properly. These cookies ensure basic functionalities and security features of the website, anonymously.
Functional
Functional cookies help to perform certain functionalities like sharing the content of the website on social media platforms, collect feedbacks, and other third-party features.
Performance
Performance cookies are used to understand and analyze the key performance indexes of the website which helps in delivering a better user experience for the visitors.
Analytics
Analytical cookies are used to understand how visitors interact with the website. These cookies help provide information on metrics the number of visitors, bounce rate, traffic source, etc.
Advertisement
Advertisement cookies are used to provide visitors with relevant ads and marketing campaigns. These cookies track visitors across websites and collect information to provide customized ads.
Others
Other uncategorized cookies are those that are being analyzed and have not been classified into a category as yet.
SAVE & ACCEPT
Powered by